Two sleeps away from the start of NASH, we’re not only about to embark on a conference filled with insane highs and lows but also a new experiment for CUP — Flash File. 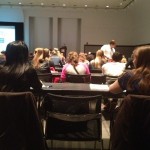 Flash File is the result of a trip that NBC Brendan Kergin and I took back in November. Maybe you remember emailing me only to get a vacation notification saying I was on a top secret research trip and all would be revealed in due time. Well, ta-da!

We were in Boston, Massachusetts scoping out the Journalism Education Association‘s fall convention. The draw was JEA’s Write-Off competitions — a journalism competition for American high school students that a friend in Montreal had told me about.

That trip was an intense experience — and not only because Kergin failed his eye test and couldn’t get his driver’s license renewed.

Write-Offs are live-journalism competitions meant to improve skill and put students in a realistic situation for writing under pressure. Students listen to a presentation on an unknown topic, have an opportunity to ask questions and then write their story — all in under 90 minutes.

Professional journalists know 90 minutes is often a cushy gift — the deadlines are much tighter with higher stakes, but it’s a good practice.

Kergin and I were there as guest judges “from the field” but most judges were journalism teachers instructing their young students on the basics of the industry. Kergin had commentary writing. My category was feature writing on a presentation by the founders of the EagleEyes Project, an organization that provides technology for kids with locked-in syndrome. There wasn’t a dry eye in the room after the presentation was over. 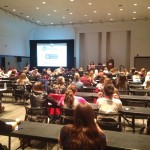 While judging the submissions, the development of a strong non-fiction narrative was pretty impressive. At 15, I highly doubt I, or most of my then-peers, would have been able to produce similar work. Maybe if we had journalism classes, but then again, when did any public school kid ever get those?

As a former student journalist who spent (and continues to spend) so much time learning by doing and emulating the people I admired, it was astounding to see so much opportunity at such a young age.

Without a doubt, we wanted to bring the concept back to CUP. Though we agreed changes would need to be made to adapt the contest to CUP, we thought it’d be an irresistible challenge for CUPpies — particularly with celebrity judges like Chris Jones and Jana G. Pruden.

To take part in this inaugural contest, register online or at NASH registration.

About the Author: Erin Hudson